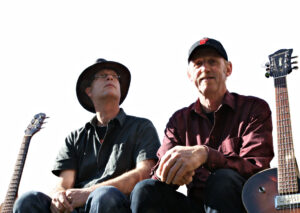 The dutch semi-acoustic blues duo Spider & The Fly brings the Stones’ repertoire of the world’s Greatest Rock & Roll Band back to basics with two guitars and two voices.  At their live-shows mega-hits such as Satisfaction and Honky Tonk Women are mixed with less well-known gems and blues songs of the past six decades.

Like the Rolling Stones, these musicians have a blues background.  Therefore the duo is logically named after a bluesy Jagger and Richards composition.

Spider & The Fly released their Tribute-cd “In A Stoney Web” in 2012, with 16 Stones covers and an Ode For Brian Jones, the Stones guitarist who tragically drowned in his swimming pool in 1969.

For their new cd “7×2” they recorded the bluessong “Ride ‘Em on Down”.  This  is not only a track on the Stones cd “Blue & Lonesome”, but was also part of the setlist of their very first show in The Marquee Club London on July 12th 1962. With a number of blues-songs from that first set, Spider & The Fly celebrate the almost 6 decades of Rolling Stones.

A performance by duo Spider & The Fly is a feast of recognition. Besides music, the audience is also treated to a musical Stones-quiz. Vocal support during the performance is appreciated, with their motto:   It’s Only Rock & Roll, But We Like It!